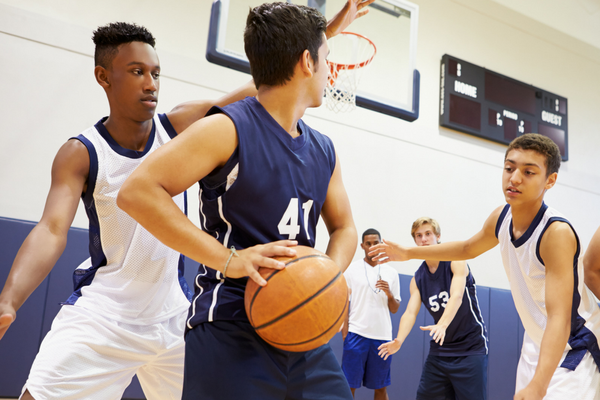 If you have seen enough basketball you may have already had this feeling when watching your child’s game:

–Did my son/daughter just play basketball for an hour, but hardly do anything?
–Is it me, or was that a really boring game?
–I thought basketball was supposed to be exciting, so why is everyone just standing around?

We have a very simple explanation as to why you may feel that way.

Zone defenses at the youth level are hurting the game and impeding your child’s development. It may seem like we are being dramatic, but we are not. If your child’s coach/program insists on playing every game in a 2-3 zone, that is a big problem.  Reasons behind this defensive scheme are usually a poor understanding of the game’s fundamentals, an attempt to keep scores close, or plain laziness.

We understand parents hope to get the best out of their children’s sports experiences. But if you aren’t a former player or coach, how do you know exactly what you are watching?

Allow us to give you some examples as to why zone defenses should be avoided as your child’s team’s first option. Then, you can decide what level of coaching instruction your son or daughter is receiving.

When a child is taught proper man to man defense, (your child is assigned one player to defend at a time) they learn responsibility.  They grasp the idea very quickly that if #20 scores, and your child is guarding #20, it is their responsibility to stop it from happening again. They often understand the degree of accountability in this scenario immediately as it is one of the major components of the game. This will force them to problem solve and take pride in goal setting on the next possession.

“I cannot let this player score because it lets everyone know I have momentarily hurt my team. I will be held accountable if he/she does score. This is a problem I need to solve, and soon.”

“Zone defenses at the youth level are ruining the game, and impeding your child’s development.”

If and when your child is assigned a player they are unable to guard, they will quickly learn teamwork and communication.  “I need to ask another teammate for help in solving this problem, otherwise my team will suffer.” With some efficient communication they can neutralize this basketball threat together. As a unit their problem can be solved, because individually the task is too difficult. It is ok for them to ask for help when they have a problem. This level of group problem solving will relate directly to conceivable goal setting in life, in school and eventually the workplace

Chasing a player from the other team around obstacles (screens) and ensuring they cannot touch the ball let alone score it, demands effort. It requires so much effort that it only takes a few minutes before a player raises his/her hand and asks the coach for a substitution. It is one of the pillars of sports. Your child is there to play a competitive game which requires concentrated effort. The better shape they are in, the longer they can stay in the game. This display of energy exertion is an excellent way to ensure your child is healthy, active and alert.

In a 2-3 zone, your child could legitimately remain within the confines of 10 square feet on defense for an entire game. They will burn less calories, build less muscle and expend far less energy in a full game than they could in a few minutes of man to man defense. Not to mention, you will drive home with a far more energetic child in the back seat!

The rules of a 2-3 zone are simple. If you are assigned to position X, and anyone with the ball fills the space of position X, they become your responsibility. In textbook man to man defense, you could potentially guard all 5 players from the opposing team at one point or another during ONE possession. This requires a tremendous amount of effort and discipline. When 5 players on a court gel cohesively as a unit, beautiful basketball ensues. All players take pride in this group responsibility and usually embrace the challenge. Defensive discipline ensures all members of the team (including players on the bench) are invested in the outcome of the play.

You will rarely see all players of a team playing a 2-3 zone become ecstatic over a great defensive play. Mainly because it is not a true team defense. It is a defense comprised of 5 individuals with tasks. It is a defense your child should not learn until they have to. Most importantly, it is a defense that is ruining your child’s experience.

At your child’s next game, observe closely. Tell us if we have it wrong. Because if we have it right…you’ll thank us on the car ride home!