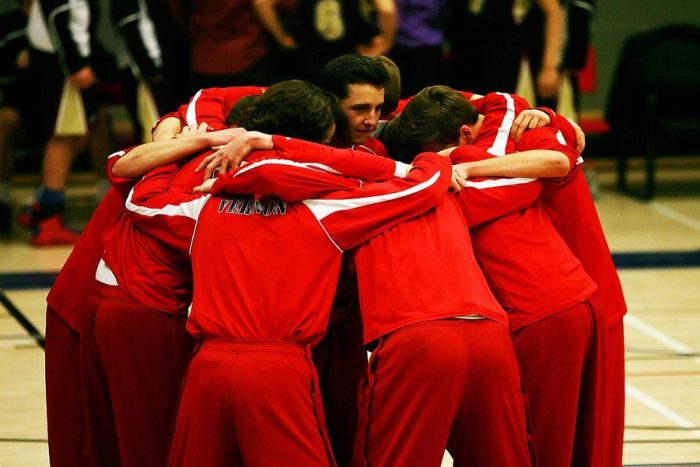 Dr. James Naismith invented the game of basketball in Springfield, MA in 1891. Since it’s inception, it has always been a team game. People may remember individual players and their accolades when reminiscing of incredible moments on the court but the principle of the game has never changed. One team plays against another team to decide a winner.

Over time, the root of the sport has commonly become distorted because of fans idolizing individuals, and star players representing NBA teams. However, if you are currently watching the NCAA tournament and it’s “March Madness” you will see the purest form of the game. The remaining four teams in the NCAA tournament are not made up of stars nor a myriad of NBA lottery picks. It is comprised of committed players with one objective in mind. Winning a championship as a team.

Recent studies have shown that being a part of something bigger than yourself may be the best indicator of happiness. Basketball is no different in this regard. Being part of a sports team is a terrific progression for youth athletes to eventually make that jump into the real world.

We all understand the vast majority of youth athletes will not be playing professional sports. However, they will work after high school, hopefully throughout college and for a large portion of their lives thereafter. The earlier people embrace the values of sacrifice, selflessness and collaboration the better the results.

Ideas and inventions are created by groups. Companies are run by boards of directors. Diseases are cured by teams of doctors. When people come together for a common goal, great things ensue.

In basketball, as in life, teams are not all constructed of superstars. Teams need commitments from “role players” to ensure the best result. If your team’s point guard is also your leading scorer, the odds are your team will not be very successful. A point guard’s role is to be a leader of the team, distribute the ball and put teammates in positions to score. Different positions on the court usually have different roles. When players embrace their roles and do their part, the team becomes successful.

In fact, in the history of the NBA there has never been a point guard who has led the league in scoring and win a championship since 1950! Every point guard’s favorite player, Stephen Curry was the scoring champion in 2015-16. Guess which year the unstoppable Golden State Warriors actually lost in the finals. We rest our case!

“Youth athletes must learn the value behind doing things as a team.”

The value behind teamwork shines brightest when a team plays a group of poorly coached individuals. If you don’t follow basketball closely enough to see it by the team’s play on the court, look at the bench.

Great teammates cheer from the sidelines after every made basket. They encourage their buddies after every miss. If you see that happening, thank the coach! Players improve their own skills off the court, but coaches help to improve their chemistry with others on the court. Young children will share to a degree. But happily sharing their time on the court with another is a learned trait.

Youth athletes must learn the value behind doing things as a team. It will help them in competition, benefit them in the classroom and teach them how to achieve success in adulthood. We teach many of basketball’s values to our players on the court, but what they take with them off the court is what matters most.